Inside/Outside: Images of the LAND in Artexte’s Collection

Karla McManus is an art historian and visual theorist whose research focuses on how historic and contemporary concerns, from wildlife conservation, to environmental disasters, to anxiety about the future, are visualized photographically. She is currently Assistant Professor of Visual Art (Art History) in the Faculty of Media, Art, and Performance at the University of Regina. From 2017-2019, Karla was an Assistant Professor (LTF) at the School of Image Arts, Ryerson University. In 2019, Karla curated the exhibition Inside/Outside: Images of the LAND in Artexte’s Collection based on a research residency at Artexte Information Centre. Her recent publications include, “How Anthropo-scenic! Concerns and Debates about the Age of the Anthropocene,” in the exhibition catalogue Anthropocene: Burtynsky, Baichwal, De Pencier (2018), and "Above, Below, and Behind the Camera: the Perspective of Animals” in From Ego to Eco: Mapping Shifts from Anthropocentrism to Ecocentrism (2018). 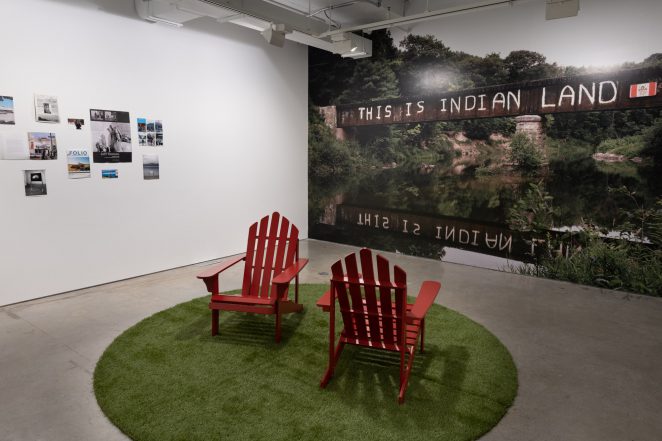 Long before the concept of the Anthropocene became a concern, artists in Canada were grappling with the country’s colonial and environmental history, using photography to respond to and express their social, emotional, or political perceptions of land. These traditions and visions, by confronting and feeding upon each other, have developed according to particular perspectives on land: an internal perspective, which seeks to bring forth experiential and subjective readings, as well as an external position of photographer as outsider, recording transformations as neutral or critical observer. In between, (inside/outside) lies work which explores the absences in the land, that takes the form of land reclamation, and aims to activate places within their histories of human and animal belonging. Through the exhibition, Karla proposes to situate the viewer within the social, cultural, and political land of Canada in 2018 by asking the question: are you inside or out?