Mary Kavanagh is an artist and professor in the Department of Art, University of Lethbridge. For over twenty years, Kavanagh’s multifaceted artwork has been presented in solo and group exhibitions in Canada and abroad. Her research interests include post atomic studies; feminist theory; deep ecology; technologies of war; and histories of science. She has documented military and nuclear sites in Utah, Nevada, New Mexico, Alaska, Japan and Canada. In 2017 Kavanagh was awarded a four-year SSHRC Insight Grant for her project, Atomic Tourist: Trinity, which explores nuclear anxiety in the 21st century. Her work is available on her website: www.marykavanagh.ca 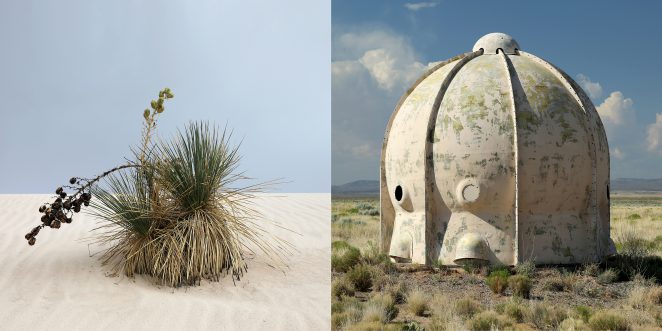 This series of photographic diptychs pairs images of natural forms with military artifacts
and architecture, documented at the White Sands Missile Range, New Mexico. The WSMR is
a military testing area operated by the United States Army. The range was originally
established as the White Sands Proving Ground on July 9, 1945, in preparation for the first
atomic bomb test on July 16, 1945. The largest military installation in the United States, the
WSMR encompasses almost 8,300 square km and continues to conduct missile testing and
range recovery operations.